Weathering With You: Who’ll stop the rain? – SciFiNow

With Your Name, anime writer-director Makoto Shinkai went from cult favourite to award-winning internationally acclaimed household name. The film went beyond the arthouse and found a massive audience, even becoming Japan’s highest grossing anime movie. For his follow-up, Shinkai has delivered Weathering With You: the story of Morishima, a teenage runaway in Tokyo. He finds a job working for a cynical journalist and falls head over heels for Hina, an older teenager who has an incredible gift: she can make the sunshine break through the clouds. As Japan experiences the wettest summer on record, her skills are in high demand, but using her power has a terrible price.

How does it feel to bring Weathering With You to an international audience?

I’m not like Disney or Pixar where you can assume from the outset that there will be an international release. From my point of view, I’m making a film for a Japanese audience and then it’s thanks to the efforts of distributors like Anime Ltd that people in other countries get to see my work. For me, getting overseas releases is like a reward, it’s like a prize for working hard on the film.

Was there a starting point for the story?

There were several starting points. The first was that because of climate change, we’re seeing a lot more rain, particularly in Japan, every summer now we’re getting heavy rain that is causing a lot of destruction and I thought that this would be a good time to make a film on the theme of the weather.

You also see in the film this idea of human sacrifice. That was something else that I wanted to work into my film. In Japan nowadays, every day someone is being trolled on social media, someone is being attacked and I started to see that as a kind of sacrifice. Also, in international politics you look at, for example Trump’s America First, and this new nationalism, and in a way the whole ‘everyone riding on the shoulders of one person who is the sacrifice overall’, that was the concept I wanted to get in.

What is the appeal to you of telling a story through the eyes of teenagers?

The reason I feature so many teenage protagonists is because at heart I think animation is for young people. And I know that when I was in my teens, animation and entertainment really helped me and I wanted to give that as an adult now to teenagers today.

I think another appeal of using teenagers is just the strength of feeling that human beings can have. Teenagers when they’re sad are incredibly sad and when they’re having fun it’s just incomparable to the kind of enjoyment that an adult feels. I see it in teenagers, I see it in my own daughter who’s nine years old. That becomes dulled in adults so it’s a way of just showing the brilliance, the strength of human emotion.

The film is stunning visually, how much of a challenge were the constant weather effects?

It was challenging and it took a long time. When it comes to the rain you have reflections on the ground, you have drops of rain on the cars and on the windows, and you end up having to draw a lot more. But at the same time, it’s something that the audience really enjoy because they can tell that it’s realistic rain, they have experienced that kind of rain and it’s visually very entertaining and I really wanted to try and make the most of that.

I actually consulted a specialist in weather, and they came and looked at the storyboards and they could tell me which way the wind would be blowing in particular scenes and whether the shape of the clouds was right. 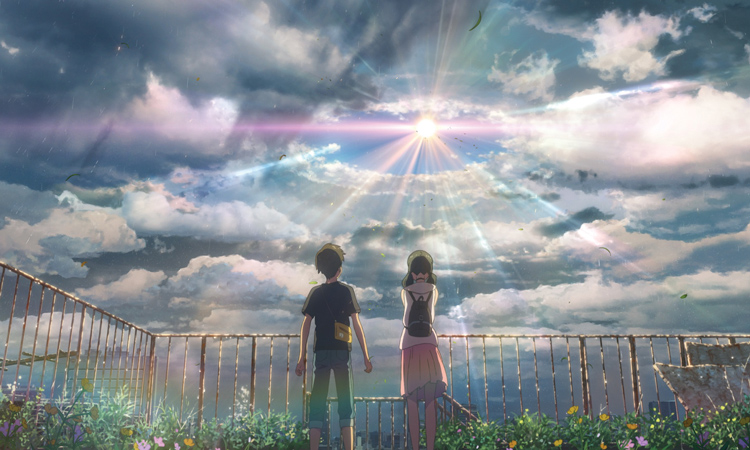 How long was the whole process?

It took about six months to develop the script and then about another ten months to do the storyboards… I suppose the pre-production part took about a year and then another year with hundreds of staff working on the film. So, two years in total, which is quite a tight schedule, we would have liked to have another year, but I wanted it to be released in 2019 so we worked to that tight schedule and then we worked very hard to get it ready.

The music is such an important part of Weathering With You. When did you start thinking about the songs?

I think music is one of the most powerful weapons that a filmmaker has, even more than what they see, I think the music is what can work with the emotions of the audience.

With Weathering With You, I gave the first version of the script to Radwimps, the band who are responsible for the music, and they read the script and came up with a few songs and then I drew the storyboards as I was listening to that music. Then I went back to them to ask for more music and carried on with the storyboards, sometimes I would request them to change the music a bit and sometimes they would have suggestions for me in terms of the story. They might suggest I make a particular scene longer or particular characters should say a certain line at a certain place; the music and the story developed side-by-side.

Was there a lesson that you learned from Your Name that helped with Weathering With You?

There was a lot I think that I brought from Your Name but one thing I think that the audience maybe wouldn’t be aware of is the fact that on Your Name we didn’t have enough budget, we didn’t have enough time and it was really hard work for the animators. This time I wanted to rectify that and make sure that the studio took care of the animators, including taking care of their health, so we had organic bentos delivered for them, we had a massage therapist come in to take care of them and I really wanted to make sure that the work environment this time around was better. I’m not sure that was the kind of answer you were looking for! [laughs]

Weathering With You is out now DVD, Blu-ray and a Collector’s Edition Steelbook from Anime Ltd.

The Intergalactic Adventures Of Max Cloud: Interview with...