Curzon has announced it will release horror biopic Shirley on 30 October (just in time for Halloween of course!) in cinemas and on Curzon Home Cinema. 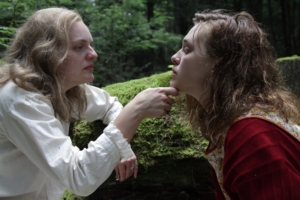 Elisabeth Moss embodies the iconic Shirley Jackson, one of the greatest horror writers of the 20th Century, in the new movie, which also stars Michael Stuhlbarg (The Shape Of Water), Odessa Young (The Stand) and Logan Lerman (Percy Jackson And The Lightning Thief)

Shirley Jackson (Moss) is on the precipice of writing her masterpiece when the arrival of newlyweds (Young and Lerman) upends her meticulous routine and heightens tensions in her already tempestuous relationship with her philandering husband (Stuhlbarg).

With the men increasingly absent, Shirley and Rose develop a relationship that blurs boundaries and allows both to challenge the stuffy patriarchal atmosphere of 1950s America.

Directed by Josephine Decker, the film received its world premiere earlier this year at Sundance, where it won the US Dramatic Special Jury Award for auteur filmmaking. Its European premiere followed at the Berlin Film Festival, where we reviewed the film – check it out here.

Shirley is released on 30 October in cinemas and on Curzon Home Cinema.

Read an Excerpt From Michael Johnston’s Silence of...

Read an Excerpt From Karin Tidbeck’s The Memory...